When Dante and Virgil enter the fourth ring of the winding path up Purgatory Mountain, they meet a band of souls weeping and racing at once, “galloping for good will and righteous love.”  Before they can ask a single question, they hear these heartening words:

“Come on, come on, don’t let time slip away
for lukewarm love!” cried those who ran nearby.
“Zeal in well-doing makes grace green again!”

These sinners are atoning for the sin that Josef Pieper said was characteristic of our day.  It is the devil of the noonday sun, acedia, spiritual sluggishness: the unwillingness, and the resulting incapacity, to derive joy from what should legitimately bring us joy.  Acedia, says Saint Thomas, is the sin against the Sabbath, because the Sabbath is to be celebrated with a restfulness that is more active, more fervent, than is the necessary toil that burdens the other days of the week.  They atone for it by calling upon the muscular virtue of zeal, engaging, to use the words of our Lord, all the heart and mind and strength and soul.

The same Greek root gives us our words zeal and jealousy, and here it is useful to note the difference.  Jealousy properly refers to a demand that what is one’s own remain inviolate.  It may become a vice, as when a jealous husband spies upon his innocent wife; but God Himself says to the children of Israel that He is a jealous God, meaning that the worship due to Him may not be granted in the least to any strange god – to any mere work of that factory of idols, the human mind.  But zeal is that same desire, born of devotion, to ensure the inviolability of a good that belongs to someone else, and particularly to God.  “Zeal for thy house hath eaten me up,” says the evangelist, when Jesus, angered on behalf both of the poor and of God, makes a whip of cords and drives the thieving dealers out of the Temple.  Zeal is the spirit that breathes throughout the celebratory Psalms.  “I rejoiced,” says the Psalmist, “when I heard them say, Let us go up to the house of the Lord.”  David is moved by zeal when he dances naked before the Ark of the Covenant.  When Ezra the Scribe reads the book of the law to the Jews returned from captivity, they are at first abashed and crushed with sorrow, but he commands them instead to refresh themselves and to feast with joy.

Zeal reveals to us all the difference between a world grown merely secular and old, and the youthfulness of Christian love.  The young student Charles Peguy threw all his capacious energy into the promotion of socialism in France.  That was before his dramatic conversion to the faith; but even in the midst of those years he retired from the prestigious Ecole Normale for a year – an unprecedented thing to do – to return to his peasant home and to begin his lifelong poetic meditation upon the life of Joan of Arc.  His Joan simply will not accept that it is God’s will that the French countryside be ravaged by the soldiers of England.  “How will they be saved?” she asks, again and again.  “How will they be saved?”  It is her zeal – her irrepressible love for the poor French peasants, her unquenchable desire to guard their rights – that opens her heart to the call to give her very body for their sake.  Peguy himself, by then an ardent Catholic, died in the front lines of battle at the beginning of World War I, a hero for his beloved France.

Or we may think of Joseph de Veustre, a young man of weak constitution, who fairly cheated his way onto a ship bound for Hawaii, so that he could hurl himself into work among the lepers on Molokai.  He came upon a sinkhole of physical and moral corruption.  He was zealous in his anger against what should not be, because he was zealous in his love for what should be.  He did not hate the wretched and dying sinners he met there, but loved them with a searing fire, to cauterize their souls, when he could not heal their bodies.  He did for them what Mother Teresa did for the dying in Calcutta.  This is no cold and abstract philanthropy.  “I would not do what you are doing,” said a journalist once when he beheld Mother Teresa cleaning the purulent sores of a dying man, “for a million dollars.” 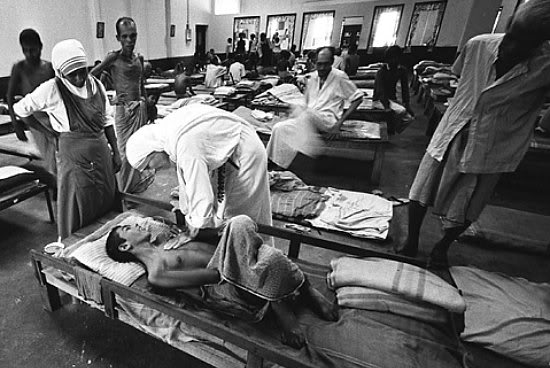 ?  She saw Christ; she saw royalty.  Her zeal but gave them the honor they deserved.

That zeal is well expressed by the words of Christ that haunted her all her life.  They are words of relentless love.  “I thirst,” said Jesus from the Cross.  “Tell her,” said Jesus in a dream to a young priest who was to visit Mother Teresa, “tell her that I still thirst.”  Jesus thirsts for the good of all lost souls.  He is the Good Shepherd, the one who does not say, “Well, ninety nine out of a hundred is all right,” but cannot rest until that one lost sheep is found again and carried home upon his shoulders.  And then there is rejoicing in heaven, more for the one than for the ninety nine.

What unreasonable love of God, that there should be such rejoicing, wrote Peguy.  That zealous man also wrote that Jesus upon the Cross wept for love.  He did not notice His own mother abandoned to sorrow at the foot of the Cross, and the beloved disciple John supporting her, because He was thinking still of that Judas whom He loved so well, and whom He could not save.

Zeal does not give up; just as youth, blessed youth, cannot believe in defeat.  I am no great exemplar of zeal, because the noonday sun, and its dry heat, and the dust of the road we travel, lie heavy upon my heart, and I forget to rejoice sometimes, and I forget to love.  I say, “I have loved enough,” but love does not understand that middling adverb.  I say, “God will take care of me,” and that’s true, but God also has granted me the great privilege of taking care for Him, so to speak – the privilege of worship.  I say, “I am doing all right,” but that makes no sense at all.  The wine that gladdens the heart has been freely broached for us all, in the Eucharist, and in all graces showered upon us by prayer, and the sacraments, and a life lived in Christian love; and would we say, “I am content with just so much gladness, and need no more”?

Perhaps our frames, sin-riddled, are too weak for so much joy.  If that is so, then zeal “makes grace green again,” as Dante  says.  We are short of breath.  The remedy is not to lie slack, but to run.  We’ll make a pitiful show of it at first, and for a while afterwards too.  But there is no other way to enlarge the heart than the way of zealous love.

I am absolutely persuaded, too, that zeal is catching.  There are some hardened souls who snicker at the grand foolishness of youth.  But there are others, not so far gone in acedia, who might look upon a youthful worshiper, or upon the youthfulness of worship itself, and burn with homesickness for a joy they have lost.  For the love of those souls, and for the love of God, we should race.  Few will be the leaders of the race, but the rest of us, the wobbly-kneed, can at least follow along, and sing, “Jerusalem, my happy home, when shall I come to thee?”