Roger Williams and The Creation of the American Soul: Church, State, and the Birth of Liberty

The role of individual conscience and religion in American society has been debated since the arrival of the first English settlers. The original intent of the Puritans was to establish a theocracy in the Massachusetts Bay Colony. John Winthrop, its first governor (1588-1649) envisioned it to be a “city on a hill.” Roger Williams (1603-83), a fellow colonist, however, challenged the right of the state to impose “the first four Commandments, which pertain to God,” in favor of an individual’s right to freedom of worship, or not to worship at all. After having been exiled for this ‘heretical’ notion, Williams founded Rhode Island Plantation to foster this vision of a strict separation of church and state.

In Roger Williams and The Creation of the American Soul: Church, State, and the Birth of Liberty, historian John M. Barry contextualizes Seventeenth Century religious and political sentiments that were translated from England to her American colonies. The theology of the Reformation which rejected traditional authority had gained numerous adherents causing a factious effect on the hegemony of the Anglican State religion. England’s persecution of religious dissenters was the main reason for the Puritan exodus to the New World.

Barry contends that Roger William’s belief in the rights of individual conscience made Williams the progenitor of that which is quintessentially American. “For he knew that to believe in freedom and liberty required faith in the freedom of thought, of conscience. And that was soul liberty.”

Two great influences in William’s life, according to Barry, were the jurist Edward Coke (1567-1625) and the scientist Francis Bacon, who were political rivals at the Court of King James I and his son, Charles I (1625-49). Williams served as an amanuensis to Coke who challenged the prevalent political concept that the kings rule by Divine Right. Coke insisted that power came from the people and that the king was subject to the Common Law. For example, regarding habeus corpus, he said

The greatest inheritance that a man hath is the liberty of his person, for all others are accessory to it…. It is against law that men can be committed and no cause shown…. [I]t is not I, Edward Coke, that speaks it but the records that speak it…. The king could not imprison by word of mouth.

Francis Bacon, a political ally of the king, also affected Williams’ thought, not because of his political insight, but rather through his advancement of the scientific method which relied on experience to determine truth. Therefore, Barry observes that Williams,

Seeing both state and church as corrupt vessels, he had therefore, and with great reluctance, come to see that his own worship must be personal and individual, and not communal.

He further believed “that mixing church and state corrupt the church. He was saying that when one mixes religion and politics one gets politics.”

Americans have always jealously guarded their First Amendment right of Freedom of Religion. Yet, there exists a tension as to what role religion should play in the public square, if any at all. Williams’ strict separation is perhaps best expressed today by the Reverend Barry Lynn, who is a member of the United Church of Christ and heads Americans United for the Separation of Church and State. Secularists also favor this approach. Both of these constituencies, however, have traditionally been in the political minority.

More in the mainstream, however, are those who believe like Winthrop that America is a nation founded upon a Judea-Christian ethic. The Founders, for example, viewed Christian values to be an important ingredient in shaping a virtuous citizenry. None, however, envisioned political leaders tethered to sectarian control. Washington believed that national policy needed to be rooted in private morality, which relied on the “eternal rules of order and right” ordained by heaven itself. Religion, he realized, reflects on the human condition and articulates values needed to build a good society. Jefferson, whose Christianity was unorthodox, to say the least, also realized the role that religion played in the formation of an ethical people. His edited New Testament is proof of his high regard for Christian ethics.

For the most part Presidents have followed Washington’s and Jefferson’s counsel regarding religious freedom and conscience rights. That is, until the election of Barak Obama. For example, in April, 2011, Obama urged the passage of a non-discrimination law that does not contain hiring protections for religious groups. And, of course, the 2012 HHS mandate that orders Catholic institutions to provide contraceptive coverage as part of their healthcare packages. These are clear violations of the separation of church and state according to any consistent interpretation of the First Amendment’s Establishment Clause, which states, “Congress shall make no law respecting an establishment of religion, or prohibiting the free exercise thereof…”

Barry chronicles the cross oceanic drama between England and the colonies in the context of church-state arguments. He shows how the battle among Anglicans, Calvinists and the radically egalitarian Levelers was played out in the English Parliament, the Royal Court and in the Colonial Councils. Williams, according to Barry, played a special role in promoting the latter group’s cause for “individualism” which afforded no hierarchy between God and man. This minority position was not popular with either the kings, who favored a hierarchical Catholic model of the Church, or with Oliver Cromwell (1599-1658), the Lord Protector of England, who favored a Calvinist synodal model for Church governance. Barry says it is a tribute to Williams’ sincerity and his ability to maintain relationships with England’s power brokers that enabled him to procure a Charter for his radically different colony.

Williams’ radical ideas on liberty, Barry contends, influenced Rhode Island’s decision to be the first state to declare independence from England, on May 4, 1776. Williams’ struggle for a society that guarantees religious freedom and respects individual conscience continues in the United States. As Barry says, “Freedom, he believed, was worth it, worth his life and worth far more than his life.” Americans continue to shed their blood for this today. 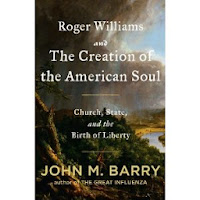 Roger Williams and The Creation of the American Soul:
Church, State, and the Birth of Liberty