Among the most momentous events of twentieth-century history is the defeat of the Communist Red Army in the Battle of Warsaw in the summer of 1920, “the miracle on the Vistula,” the subject of Adam Zamoyski’s excellent recent book Warsaw 1920: Lenin’s Failed Conquest of Europe. In the aftermath of the catastrophic First World War, with its 13 million deaths, the old order in much of Europe collapsed, and though the armistice was concluded in the West on 11 November 1918, eastern Europe, Italy, and the Middle East remained on fire for another five years. This is the background to T.S. Eliot’s “The Waste Land,” finished in Lausanne in 1922, and gives it an apocalyptic quality: “Falling towers/ Jerusalem, Athens Alexandria/ Vienna London/ Unreal” (Part V). Four vast empires collapsed—Russia, Germany, Austria-Hungary, and the Ottoman Empire, propelling several hundred million people into conditions of intermittent chaos, starvation, and war. Given the discrediting of nearly all continental European political regimes (and the Ottomans)  and the demobilizing of vast numbers of soldiers and their subsequent unemployment and bitterness, Europe was a powder-keg, with fiery instruments everywhere. There were Communist and Fascist strikes, riots, and coups d’etat throughout the continent, including Berlin, Budapest, Munich, and Milan. The Bolsheviks had taken power in Russia in 1917 and defeated their “White” Russian opponents in a bloody civil war over the next three years. Meanwhile, with the advent of the Americans in the West, the Germans, who had driven the Russians to their knees in the east, precipitating the Bolshevik revolution and Russian withdrawal from the war, were themselves forced into an armistice that became a surrender and led to the fall of the Kaiser.

Now, in 1920, the victorious, resurgent Red Army, a hungry horde effectively organized by Leon Trotsky and led by a brilliant young general, whom Zamoyski calls an “aristocratic Russian nihilist,”  Mikhail Tukhachevsky, swept westward into what had been Byelorussian, Lithuanian, Ukrainian, and Polish provinces of the old Russian, German, and Austrian empires. The north European plain that stretches from the Russian Ural Mountains to the English Channel and the Atlantic seaboard of France is a vast, flat stretch, with few defensible natural borders and some large but slow-moving and easily-fordable rivers. Mongols, Tartars, and Huns had swept across it into Europe for hundreds of years, and then Napoleon’s armies had swept through it into Russia and then retreated ruinously back across it in 1812. Germany, Austria-Hungary, and Russia had liquidated the old Kingdom of Poland in a series of partitions, concluded in the 1790s, that the courageous, renegade Austrian historian Erik von Kuehnelt-Leddihn called “the original sin of modern European history.”

In 1920 Europe was aflame and the appeal of the victorious revolutionary Lenin and Communism was immense throughout Europe, among the unemployed, the demobilized, and the intellectuals. Marxist ideas of “permanent revolution” and “historical inevitably” were widespread and the charismatic authority of fanatical but brave revolutionaries such as Lenin and Trotsky seemed to have world-historical significance.

The newly-revived Polish state, which had disappeared from the map of Europe for 125 years, was comprised of pieces of the former Russian, German, and Austro-Hungarian empires, a war-exhausted terrain with no easily defensible borders and no recent experience of self-government. Large numbers of Poles were themselves sympathetic to Communism, not least Jews, who had so often suffered under the previous empires. Some Poles had high positions in the Bolshevik hierarchy, including Feliks Dzierzynski, the ferocious head of the Soviet secret police, the Cheka, and Lenin had confidently set up a Red Polish government-in-exile to take power when Warsaw fell.

The progress of Tukhachevsky and the Red Army into Poland was extraordinarily rapid, and though his vast armed horde was poor and hungry it was effectively indoctrinated and inspired by the same fanatical, egalitarian morale and utopian hope that had animated French Jacobin army victories against larger, better-equipped monarchical armies from 1793 on, and on whose momentum and trajectory Napoleon built his military success. At a different level, the discrediting of the old empires and their class system by the horrific, fruitless carnage of World War I had left Europe with a moral-political vacuum that was felt from London and Paris to Milan, Rome, Istanbul, Vienna, Budapest, Munich, and Berlin. Even decent liberals and non-Marxist Socialists felt the pull of the utilitarian ideal of Communism, its apparently “scientific” understanding of history, its universal, trans-nationalistic moral appeal. Lenin and Trotsky were not alone in seeing 1920 as the miraculous year, the initiation into the final, progressive phase in which the Communist Revolution would spread like wildfire throughout the world. They thought the key was spreading the revolutionary flame to Germany; but between their revolution and the German turmoil and opportunity stood a fragile, infant state: Poland. “World revolution seemed with reach,” writes Adam Zamoyski.

Zamoyski’s brief, lucidly-written, well-researched study of the Battle of Warsaw tells this story very well, not least in the particular, crucial details of the military campaign, using excellent maps. The Poles were led by Jozef Pilsudski, a veteran of German and Russian jails and the Polish Legion of the Austro-Hungarian Army, and a number of other gifted Polish officers who had previously served in the German, Austrian, Russian, or French armies. Their soldiers were a hodge-podge of Poles, mostly from the same armies or from illegal, insurgent, pre-war, Polish para-military associations. Their preparations and arms were radically diverse; their numbers vastly smaller than the Red Army. The Poles were advised by French Gen. Maxime Weygand and Major Charles de Gaulle, who had himself been a German POW in the immediately preceding years, but no troops were given them by their nominal French and British allies.

Throughout June, July, and early August, 1920, the rapid westward drive of Tukhachevsky’s Red Army, covering several hundred miles, seemed unstoppable, and fear and fatalism seemed to possess many of the Polish troops. The Red Army came within ten miles of Warsaw and Polish Communist fifth-columnists within the city began sabotage activities. But rather than cracking, morale remained high in the city and in most units of the army, and a brilliant, risky strategic counter-attack conceived and undertaken by Pilsudski had immense success, routing vastly larger forces and sending the Red Army reeling eastward and destroying large pieces of it.

Yet perhaps the most interesting issue raised by the Russo-Polish War and the battle of Warsaw comes down to questions of worldview, faith, and historical experience. Despite their subjection by their powerful authoritarian neighbors Austria-Hungary, Germany, and Russia, especially the latter two, for the 125 years until 1918, the Poles had a national history, and one with long periods of effective self-governance. Catholicism had kept alive their language, national self-consciousness, and moral awareness. A history of serving as a bulwark against, and victim of, barbaric, eastern invasions of Europe—Mongol, Hun, Tartar, Moslem, Russian, Cossack, or Bolshevik—predisposed them to see themselves as civilized, Christian Europeans. In the event, the “Polish masses” were less susceptible to the universalistic, “scientific socialist,” Bolshevik propaganda appeal, which was extraordinarily intense, despite the large number of “Red” Poles beyond their borders and some within them.

If Tukhachevsky’s Red Army had taken Warsaw in the summer of 1920, “Red” insurrections further west and south—in Berlin, Budapest, Prague, Vienna, Munich, the Rhineland, perhaps Lille, Paris, Turin, Milan—would most likely have opened the gates of their cities to the apparently “world-historical” Communist forces of the future, with incalculably disastrous consequences for human civilization. Adam Zamoyski’s Warsaw 1920: Lenin’s Failed Conquest of Europe reminds us of how perennially fragile the status and transmission of even a minimally decent civilization is, of how grievous a deficiency it is that most college graduates in our time know so little about their own era (the century in which they were born), and of how little our vast Western university systems—especially their fad-prone humanities and social-science departments, devoted to nominalist scholarship of diminishing circles of significance and intelligibility—have done to remedy that deficiency.  Nevertheless, as two recent popes—a Pole and a German—who lived through the tragic events of the 20th century have repeatedly struggled to make clear, only moral truth can make us free, in any sense of “free” that is worth having.

Editor’s note: M.D. Aeschliman  He has no Polish ancestry or relations. Part I: How the Poles Saved Civilization 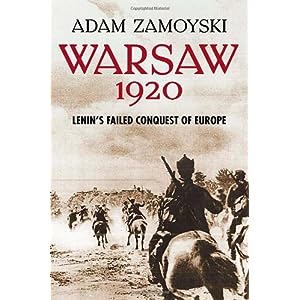