The Return of History

The gruesome gorgon of Marxist historiography has been finally and thoroughly discredited by the very historical process in which it reposed ultimate faith for its own “scientific” vindication, yet this is a fact that a still largely Marxist, or Marxist-tainted, tenured historical profession is most unwilling to acknowledge. An Italian journalist recently and prominently interviewed the very aged, long-time British Communist historian Eric J. Hobsbawm and described him as the “world’s greatest historian,” and it is some time now since the repentant Marxist historian Eugene Genovese (now a Catholic) pointed out how unhappy and surprised the prominent American Marxist historian Eric Foner was with the rapid fall of Soviet Communism. “Scientific socialism” proved not to be scientific and the progressive Marxist millennium failed to arrive, its actual effects rather resembling hell than heaven.

Yet given the apocalyptic-catastrophic character of world history 1914-1945, and intermittently since (e.g.,  the Gulag, Mao’s China, Cambodia, Rwanda), no thoughtful person ought to credit any attempt to restore the liberal-utilitarian or “Whig” alternative to Marxist chiliasm—the view that modern history is the story of collective, cumulative, inevitable, and irreversible human improvement and progress by means of political liberalism, science, technology, commerce,  industry, and secular education. The great American Protestant theologian Reinhold Niebuhr (1892-1971) was right to identify this illusion and heresy as “the belief that historical development is a redemptive process,” a belief perhaps most widely and damagingly conveyed in the twentieth-century by H.G. Wells and John Dewey, but now everywhere in our light-headed culture.

The greatest single historian of the last century who saw through both the “Whig” and Marxist ideologies and illusions of “inevitable” progress was the Englishman Sir Herbert Butterfield (1900-1979), on whom Kenneth B. McIntyre has written a fine, short, introductory study, following up on the C.T. McIntire’s exhaustive Herbert Butterfield: Historian as Dissenter (Yale, 2004). Shortly after Butterfield’s death, the English journalist Patrick Cosgrave called him “the greatest English historian,” and perhaps only Gibbon, Carlyle, and Macaulay would be his rivals for scope, boldness, and literary-philosophical power. Yet Gibbon and Macaulay are ultimately and precisely the kind of “Whig” historians whom Butterfield’s life-work did so much to discredit, first and foremost in his short, lucid historiographical classic The Whig Interpretation of History (1931), published in that ominous decade of  progressive-liberal disconfirmation, the 1930s.

For modern, English-speaking peoples, Butterfield may be said not only to have written distinguished works of political and diplomatic history on several subjects (Machiavelli, Napoleon, eighteenth-century British politics, international relations), but actually to have invented two major subsets of historical study: historiography (the history of the writing of history) and the history of science. In The Origins of Modern Science, 1300-1800 (1949), Butterfield built on the very brief but influential volume Science and the Modern World (1925) by Alfred North Whitehead.

Among the most notable features of Butterfield’s ground-breaking history was his argument for the close association of the Scientific Revolution of the seventeenth-century, the “century of genius” (Galileo, Descartes, Newton, Leibnitz), with the emergence by that century’s end, first in France and then in England and elsewhere, of a militant secular ideology of cumulative, collective, and irreversible human improvement or progress that had revolutionary, even chiliastic and Gnostic features. Though the outlines of the modern ideology of progress were evident in the empiricism and ultilitarianism of Francis Bacon in the early 17th century in England, they were mitigated by important, residual Christian and moral features.

By contrast, Bernard de Fontanelle and the French “philosophes” who followed him in eighteenth-century France were vehemently anticlerical, unwittingly “dissolving,” as Butterfield put it, Western civilization itself, “having eyes for nothing except a future of brave new worlds.” Instead, politically they helped produce the Jacobins, Napoleon, Marx, “scientific socialism,” Lenin, Stalin, Mao, and the “Khmer Rouge.”

Philosophically, as McIntyre puts it, the French and Francophile “popularization of the scientific revolution resulted not in a genuinely scientific disposition”—such as the great seventeenth-century scientists had had—“but in scientism, a Gnostic way of immanentizing the eschaton, which has characterized modern political and social discourse since the age of the philosophes.” The same argument has also been recently made by Tzvetan Todorov, Director of Research at the French Centre National de la Recherche Scientifique in Paris, in his Hope and Memory: Reflections on the Twentieth Century (Eng. tr., Princeton, 2003; see Ch. 1).

Butterfield’s pioneering of the history of science— a field subsequently developed with brilliant and massive scholarship and insight by Stanley L. Jaki and others—was closely related to his historiographical interests in the premises, assumptions, and presuppositions—conscious and unconscious, implicit and explicit—on which history is conceived, researched, and written.

The “Whig” assumptions, naively anti-metaphysical, scientistic, and optimistic, of Bacon, Gibbon, and Macaulay (among many others, increasingly during the 19th century), produced a chauvinistic, Anglophile, triumphalist historical narrative with domestic and international uses and effects—“rule Britannia” in the world, imperial sphere—that close observers of great genius—Swift, Johnson, Burke, Cobbett, Carlyle, Newman—‘saw through’ long before calamitous events commencing in 1914 began to inter it as a myopic, optical illusion.

Living through this era of unprecedented and quite unexpected ferocity and apocalyptic evil,  the Augustinian Christian Butterfield was able to see and to say that modern tyranny, anarchy, war, and ideological hysteria had epistemological roots in the naïve, intolerant, reductionist, secularizing scientism that had proved to be the “opiate of the intellectuals,” with increasingly accelerating, intoxicating, and disastrous historical effects from 1700 onward. He was joined in this critique by great contemporaries in the neo-orthodox Protestant and neo-Thomist Catholic movements of thought: Hilaire Belloc, G.K. Chesterton (one of whose essays inspired him at an early age), T.S. Eliot, Arnold Toynbee, Reinhold Niebuhr, Christopher Dawson, Jacques Maritain, Carlton J.H. Hayes, and Jacques Barzun.

Yet although Butterfield is perhaps the greatest of these historians, his astringent, antiseptic views of  “Whig” and Marxist illusions about the alleged goodness of human nature and the inevitability of human improvement did not issue in or produce a reactionary politics or cultural despair, as they had in his predecessors Carlyle and Nietzsche. “Machiavelli believed that human nature was thoroughly wicked,” Butterfield wrote, and “subscribed to the ordinary vulgar doctrine that morality does not pay,” but Hooker, Locke, Hamilton, Madison, Burke, Lincoln, Pope Leo XIII, and Lord Acton did not. Though critical of his great Cambridge predecessor Acton (1834-1902), Butterfield read and meditated him throughout his life and agreed with him on the centrality of moral liberty in the history of humanity and on the relative success of the Anglophone nations in securing it, largely through the impetus, trajectory, and residual momentum of Christianity and common-law ideas and the suspicion of all aggregations of power that they generated.

Butterfield also saw that although resistance to gross, flattering, seductive, cartoon versions of human nature, history, and improvement was badly needed in the modern era, merely correct, erudite, technical, ‘nominalist’ history was an inadequate response. His historiographical interests were philosophical, ethical, and ultimately theological, like those of Niebuhr and Maritain and his own close Cambridge friend, colleague, and fellow Methodist Basil Willey, as evinced in the latter’s influential Cambridge course and writings on “the English moralists.” In Butterfield’s case these interests bore fruit in a great 1949 series of BBC-radio broadcasts published in 1950 as Christianity and History, one of the great historical books in English.

Early on, as a young, working-class student in Yorkshire, Butterfield had wanted to be a writer and had read historical novels—Sir Walter Scott, Dickens, and Tolstoy—and later as an undergraduate at Cambridge he won two undergraduate essay competitions that straddled history and literature, one on Dickens and the other published in 1924 as The Historical Novel: An Essay. He also wrote another essay, on G.K. Chesterton, that showed how profoundly marked he was by that writer’s insight into “the contingency of history” (C.T. McIntire). It was perhaps Butterfield’s early, passionate, perceptive interest in the historical novel, in addition to the fundamental Christian piety of his modest home, that gave him the penetrating insight into human nature that made him something more than a great academic historian. This insight is apparent in The Whig Interpretation of History and in Christianity and History. “The truth is,” he wrote in the latter,  “that if men were good enough neither the ancient city-state, nor the medieval order of things nor modern nationalism would collapse;” we “are always faced with …the defect of human nature in general.” And when “these great human systems crumble or when the mighty are fallen, it is useless to say that a cleverer politician might have saved them, for his statesmanship is still only the art of dealing with the problems human cupidity has raised or of coping with the willfulness of human beings.” Ultimately, if  “judgment comes” on modern “democracy, that will be partly because it encouraged—and in fact erected into a system—[the] policy of flattering human nature.”

Kenneth B. McIntyre’s volume on Butterfield is an outstanding addition to the “Library of Modern Thinkers” series published by ISI Books. 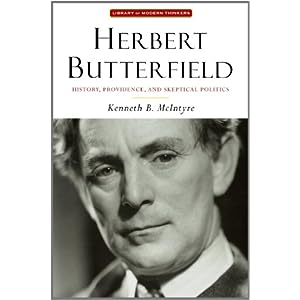