“They are three very strange old ladies,” said Quicksilver, laughing. “They have but one eye among them, and only one tooth.  Moreover, you must find them out by starlight, or in the dusk of evening; for they never show themselves by the light either of the sun or moon.”

What do the beauty and color of flowers, the tastes and variety of food, the innocence and liveliness of children, the speed and mettle of horses, the heroic deeds of noble men, and the goodness of the human heart all share in common? They all dwell in the original wonder book of God’s handiwork and Mother Nature’s creation. Indeed as Hopkins writes in “God’s Grandeur,” “There lives the dearest freshness deep down things”—an idea that also infuses Hawthorne’s version of six of the most famous classical myths. In this most imaginative yet faithful version of these ancient tales, Hawthorne depicts the mystery, miracle, secret, or hidden power that lives deep down things. Whether it is the glory of the fall or the purity of the snow, the perfume of flowers or the deliciousness of food, the greatness of noble men or the sweetness of children, A Wonder Book depicts the inexhaustible riches of creation teeming with goodness and beauty in a myriad of forms.

Man himself is one of these chapters in the wonder book. In “The Three Golden Apples” Hawthorne portrays not only the extraordinary physical power of Hercules performing his famous Twelve Labors like chasing a stag for twelve months but also the spiritual power of patience, tenacity, and determination that Hercules shows in wrestling the Old Man of the Sea and in traveling across the ocean in a cup to retrieve the apples. In “The Gorgon’s Head” Hawthorne describes the amazing feat of Perseus who kills and beheads the Gorgon by uniting his powers of mind and body, by exercising the boldness of Quicksilver and the prudence of Athena to conquer the monster whose gaze turns men into stone. In “The Miraculous Pitcher” Hawthorne captures the profound goodness of the human heart epitomized in the hospitality of the elderly couple of Baucis and Philemon who welcome all strangers as if they were gods in disguise deserving of the best gifts a host can offer a guest. Baucis and Philemon’s generous kindness inspires the Greek gods disguised as beggars to proclaim, “You, with your scanty means, have mingled so much heartfelt hospitality with your entertainment of the homeless stranger, that the milk became an inexhaustible fount of nectar, and the brown loaf and honey were ambrosia.” To repay the kind couple for their overflowing hospitality, the gods reward them with the miraculous pitcher that always replenishes itself when emptied to the last drop—a symbol of the wonder of the human heart whose love knows no limits.

The variety of the seasons, the pied beauty of flowers, and the abundance of the fruits of the field are another chapter in the wonder book.  Venturing outdoors enjoying the special

pleasures afforded by the four seasons, the children gather nuts in the fall, enjoy snow forts and sledding in the winter, and take hikes through the Berkshire Mountains in the spring with their companion Eustace Bright. During these adventures, which frame the story, the children beg for stories as part of the fun of the day. Eustace, a college student home for the holidays from Williams College, regales them with the myths that befit the season or occasion. As the children gather for their outing in the Fall in “as fine a day as ever gladdened the aspect of this beautiful world,” the season evokes in Eustace’s memory the famous story of King Midas as he contemplates “how the touch of Autumn has transmitted every one of its green leaves into what resembled the purest gold.” In the tale which follows, Hawthorne illuminates the distinction between the golden color of beauty in its glorious splendor and the metal that symbolizes wealth. After receiving the golden touch and transforming the roses, curtains, books, and spectacles into gold, Midas touches his breakfast only to discover that he exchanged the delicious tastes of potatoes, eggs, hot cakes, and coffee for more money in the form of gold coin. Enthralled with the gift of the golden touch that he requested of the Greek gods, Midas revels in the magical transformation—until he kisses his daughter Marygold and transforms his beloved daughter with her radiant smile and dimple on the cheek into a cold statue. Gold metal loses all its fascination when Midas awakens to the meaning of the true wonder of goodness and beauty found in roses, food, and children: “He felt that his little daughter’s love was worth a thousand times more than he had gained by the Golden Touch.” Midas also changes his mind when he compares the worth of good food to the treasure of wealth: “A piece of bread is worth all the gold on earth.” Roses, food, and a child possess a mystery, secret, or hidden grace that radiate the divine—a preciousness that surpasses all material wealth because of the ineffable, inexhaustible joy they bring. The cold glass of water, the hearty crust of bread, the happy smile of Marygold, and “all the beautiful roses, that smelled so sweetly and had so many lovely blushes”—become not only “worth their weight in gold” but “exceeded in value all the wealth that could be piled up betwixt the earth and sky.” 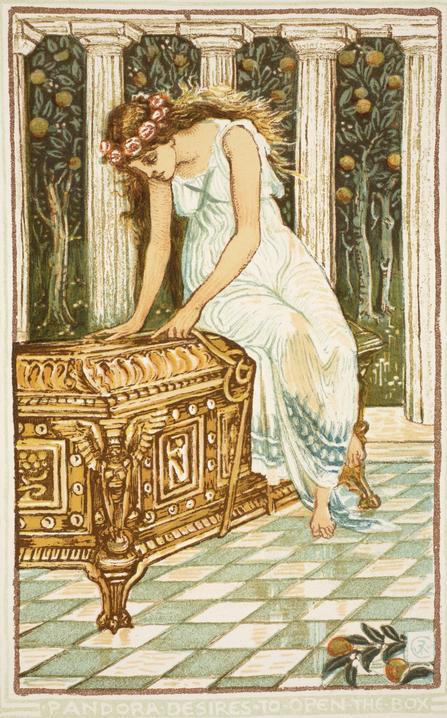 hildren are another chapter in the wonder book. Hawthorne gives the children in the book who hear Eustace’s stories the names of flowers: Primrose, Periwinkle, Sweet Fern, Dandelion, Buttercup, and Sweet Fern. Flowers that adorn the world with their abundance, variety, color, and fragrance resemble the exuberant energy of children “full of life” who also beautify and enrich the world as they evoke the freshness of the paradise of innocence before Pandora opened the forbidden box and released the Cares, Sorrows, and Troubles that robbed the unspoiled world of its purity. Eustace narrates this myth in the background of the snowstorm “when the world was as new as Sweet Fern’s brand-new humming-top” and when the world enjoyed but one season, “the delightful summer.” Although Pandora’s curiosity ended the paradise of children, the last creature to emerge from the box is the beautiful being called Hope described as “a cheery little body” with wings “colored like the rainbow” to remind man that “Hope spiritualizes the earth; Hope makes it always new” and hints “of an infinite bliss hereafter”—the character of Hope bringing the same cheer, purity, brightness, and newness into the world that flowers and children also signify. In “The Chimaera” the two children who see with fresh eyes and rapt wonder lead the mighty Bellerophon to find the winged horse Pegasus that no one else remembers or believes to exist. While a jaded middle-aged farmer regards horses in terms of mere horsepower that plows fields and a skeptical old gentleman has no memory or belief in Pegasus, a boy and girl full of wonder testify to the reality of the winged horse because the girl heard him neigh and the boy saw his reflection in a fountain.  As the children with their hearts and shining eyes behold the wonder of the glorious horse (“never was any sight so beautiful as this, nor ever a horse’s eyes so wild and spirited as those of Pegasus”), they also testify to the “dearest freshness deep down things” that reveals the invisible things of God by the things that are visible.