Let’s Raise a Glass to the Bad Popes!

It may seem odd, on the feast day of the Roman Fact, to discuss the less-than-stellar occupants of the Chair of Peter. I would propose that it is precisely these weak and sometimes sordid men who offer one of the most startling historical and apologetical claims for the indefectibility of the church. Catholics ought not to be reticent or ashamed about such men. A frank analysis of their weaknesses shows that often the Church survives in spite of the papacy, while the office endures as a witness to the seamless garment of Church tradition.

The demerits of some of the popes can be broken down into three categories: the inept, the imprudent, and the immoral.  It is astonishing among the 265 holders of the office that so few can be charged with any of these (indeed around a third of all popes are recognized as saints). Nonetheless they are to be found; weaklings who refused to teach when teaching was necessary, spectacularly imprudent miscalculators, and downright seedy and Augean characters.

The last category has been one of the most popular sticks with which to beat the Church. Alexander VI (1492-1503) is quite well known, more so now because of recent television adaptations –though it must be admitted there are few families more tailor-made for HBO than the house of Borgia. What can be said of Alexander? He did it. Almost every single immoral thing of which he is accused. In fairness, he did not do one thing his enemies alleged: commit incest with his daughter Lucrezia. . .What a moral superhero.

Like the Borgia pope, others too had illegitimate children, Alexander’s predecessor Innocent VII (1484-1492) set the stage in that respect. Sometimes other vices came into play, such as the brutal anger of Pope Urban VI (1378-1389), who verbally and sometimes physically assaulted his own cardinals, so much that they started the Great Western Schism. Want worse than that? The only thing that saves the papacy of the tenth century from the HBO treatment is its remoteness and lack of much historical material (it is sometimes charitably called the saecula obscura). This is the period of the “Pornocracy” (can one think of a worse name?). In it we see popes complicit in the murders of their predecessors, all under the ruthless tyranny of the Theophylact family of Rome. Some of the charges against John XII (955-964)—elected at 18 years old—are not fit for digital print.

There was a certain one, blessed in name (Benedict IX), but certainly not in deeds, a son of the consul Alberic, but more the progeny of Simon Magus rather than a follower in the footsteps of  Simon Peter, since he bought the papacy for himself by freely spending his father’s money. Indeed, after his assumption of the priesthood, how dishonest, how loathsome, how foul, and how execrable has been his life, I shudder to relate . . . . After robberies, murders, and other abominable acts, the Roman people, unable to bear his iniquity any longer, caused him to be cast out of the city, and drove him from the episcopal chair of Rome.

Few nations or corporations can hit a 200 year “rough patch” of bad leadership and survive.  The Church has done it several times over.

The Popes above are the headline grabbers. In spite of their personal immorality Church business went on.  Under John XII, the Order of Cluny grew and Otto I was crowned, bringing religious and secular stability back to Europe. Under Alexander the Treaty of Tordesillas meant the continued age of Exploration, without a world war between Spain and Portugal. Far more damaging to the Church were Popes who were outright inept and corrupt. The papacy is the inventor of nepotism and the powerful position of “Cardinal-nephew” spanned hundreds of years, occasionally producing a St. Charles Borromeo, but more usually it resulted in people like the dishonest nephew of Paul IV (1555-1559), Carlo Cardinal Carafa. Particularly detrimental were those who failed to teach at critical times. A Pope like Honorius (625-638) squandered all of the significant papal achievements since Gelasius (492-494) in the Christian east, by sending a non-committal letter regarding the heresy of Monothelitism, a magisterial misstep (not however, a doctrinal error) that was to have long lasting effect.

The history of the papacy is also rife with notoriously bad prudential decisions. Clement VII’s papacy (1523-1534) was a string of colossally irresponsible determinations. He was the fiddler while the Church of Rome burned. His response to the Reformation was tepid and his dogged opposition to the Catholic emperor Charles V is historically inexplicable. His fast-dealings resulted in the defection of some of Charles’ troops, placing the blame for the disastrous sack of Rome in 1527 squarely on the pope’s own shoulders. His terror at the chimera of conciliarism prevented the early assembly of the Council of Trent. The one principled decision he made—to maintain the validity of Henry and Catherine of Aragon’s marriage—lost almost the whole English-speaking world to the Catholic Church (not that it was an incorrect decision, but for the hapless Clement even correct actions had terrible consequences). His namesake, Clement XIV (1769-1774) suppressed the Jesuit order in 1773, in the midst of the Enlightenment and on the cusp of revolution. Clement did not just shoot the Church in the foot by this declaration, indeed by destroying this elite intellectual order, Clement shot the Church in the head.

Nor are good and holy popes immune from imprudent decisions. St. Pius V’s promulgation of Regnans in excelsis (excommunicating Elizabeth I and authorizing her overthrow) attempted to resurrect a doctrine of papal power encrusted with desuetude, and in so doing, immeasurably increased the difficulties of the small Catholic remnant of England. Even the prudence of Pius XII we have seen questioned aggressively in our own day.

Sometimes papacies are so disastrous that they change the course of history. Martin IV (1281-1285) was one of these. In four short years he squandered the signal achievements of the great medieval pontiffs stretching back to Sts. Leo IX and Gregory VII. Instead of being a Pope for Christendom, he decided to favor France (a predilection that continued, inexplicably and sometimes catastrophically, in the papacy for the next several hundred years). He compromised a carefully worked out solution to the Eastern schism, solely for the short term advantage of the Angevin monarchy, by maliciously excommunicating the Byzantine emperor and giving French lords permission to attack him. When Sicilian rebels overthrew the French crown, Martin issued Crusading bulls to put down the rebellion—Catholics “crusading” against other Catholics, the final nail in the coffin of the crusading ideal. His papacy led to a short term 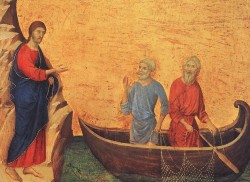 reaction which resulted in the tragedy of Anagni and finally to the Avignon papacy. Martin IV was a bad pope.

Historical interpretations can certainly vary, but examples could be multiplied. In the end however it was to such men as Martin IV that Christ entrusted His Church. Of all of the Apostles Christ chose the impulsive, malleable, and sanguine Peter. Chesterton puts it best in Heretics:

When Christ at a symbolic moment was establishing His great society, He chose for its corner-stone neither the brilliant Paul nor the mystic John, but a shuffler, a snob, a coward—in a word, a man. And upon this rock He has built His Church, and the gates of Hell have not prevailed against it. All the empires and the kingdoms have failed, because of this inherent and continual weakness, that they were founded by strong men and upon strong men. But this one thing, the historic Christian Church, was founded on a weak man, and for that reason it is indestructible. For no chain is stronger than its weakest link.

Just as God exalts the humble and the weak and raises up saints, so the power of God shines through the weakness of these men. Could there be a more signal proof of the Divine assistance and the indefectibility of the Church? This great feast marks the Apostles who poured out into that See, as Tertullian said, “not only their blood, but their whole doctrine.” Today we should raise our glasses (and some much needed prayers) to and for these weak, corrupt, and sometimes downright bad men. They too are weak links in the chain that did not and cannot break.

Donald S. Prudlo is Associate Professor of Ancient and Medieval History at Jacksonville State University in Alabama. He is also Assistant Professor of Theology and Church History at the Notre Dame Graduate School of Christendom College. His specialty is saints and sainthood in the Christian tradition, and he is the author of The Martyred Inquisitor: The Life and Cult of Peter of Verona (Ashgate, 2008) and has recently edited The Origin, Development, and Refinement of Medieval Religious Mendicancies (Brill, 2011).