Did Muhammad exist? It is a question that few have thought to ask, or dared to ask.

For most of the fourteen hundred years since the prophet of Islam is thought to have walked the earth, almost everyone has taken his existence for granted. After all, his imprint on human history is enormous.

The Encyclopedia Britannica dubbed him “the most successful of all Prophets and religious personalities.” In his 1978 book The 100: A Ranking of the Most Influential Persons in History, historian Michael H. Hart put Muhammad in the top spot, explaining: “My choice of Muhammad to lead the list of the world’s most influential persons may surprise some readers and may be questioned by others, but he was the only man in history who was supremely successful on both the religious and secular level.”

Other historians have noted the extraordinarily rapid growth of the Arabian Empire in the period immediately following Muham­mad’s death. The Arabian conquerors, evidently inspired by his teach­ing, created an empire that in fewer than one hundred years stretched from the Iberian Peninsula to India. Not only was that empire immense, but its cultural influence—also founded on Muhammad’s teaching—has been enduring as well.

Moreover, Islamic literature contains an astounding proliferation of biographical material about Muhammad. In his definitive two-volume English-language biography of Muhammad, Muhammad at Mecca (1953) and Muhammad at Medina (1956), the English histo­rian W. Montgomery Watt argues that the sheer detail contained in the Islamic records of Muhammad, plus the negative features of his biography, make his story plausible.

However sharply people may differ on the virtues and vices of Muhammad, and on the value of his prophetic claims, virtually no one doubts that he was an actual person who lived in a particular time and a particular place and who, more to the point, founded one of the world’s major religions.

Could such a man have never existed at all?

There is, in fact, considerable reason to question the historicity of Muhammad. Although the story of Muhammad, the Qur’an, and early Islam is widely accepted, on close examination the particulars of the story prove elusive. The more one looks at the origins of Islam, the less one sees.

This book explores the questions that a small group of pioneering scholars has raised about the historical authenticity of the standard account of Muhammad’s life and prophetic career. A thorough review of the historical records provides startling indications that much, if not all, of what we know about Muhammad is legend, not historical fact. A careful investigation similarly suggests that the Qur’an is not a collection of what Muhammad presented as revelations from the one true God but was actually constructed from already existing mate­rial, mostly from the Jewish and Christian traditions.

The nineteenth-century scholar Ernest Renan confidently claimed that Islam emerged in the “full light of history.” But in truth, the real story of Muhammad, the Qur’an, and early Islam lies deep in the shadows. It is time to bring it into the light.

Why embark on such an inquiry?

Religious faith, any religious faith, is something that people hold very deeply. In this case, many Muslims would regard the very idea of applying historical scrutiny to the traditional account of Islam’s ori­gins as an affront. Such an inquiry raises questions about the founda­tional assumptions of a belief system that guides more than a billion people worldwide.

But the questions in this book are not intended as any kind of attack on Muslims. Rather, they are presented as an attempt to make sense of the available data, comparing the traditional account of Islam’s origins against what can be known from the historical record.

Islam is a faith rooted in history. It makes historical claims. Muhammad is supposed to have lived at a certain time and preached certain doctrines that he said God had delivered to him. The verac­ity of those claims is open, to a certain extent, to historical analy­sis. Whether Muhammad really received messages from the angel Gabriel may be a faith judgment, but whether he lived at all is a his­torical one.

Islam is not unique in staking out its claims as a historical faith or in inviting historical investigation. But it is unique in not having undergone searching historical criticism on any significant scale. Both Judaism and Christianity have been the subject of widespread scholarly investigation for more than two centuries. The nineteenth-century biblical scholar Julius Wellhausen’s Pro­legomena zur Geschichte Israels (Prolegomena to the History of Israel), a textual and historical analysis of the Torah, revolutionized the way many Jews and Christians looked at the origins of their scriptures and religious traditions. By the time Wellhausen published his study in 1882, historical criticism, or higher criticism, of Judaism and Christi­anity had been going on for more than a hundred years.

The scholarly “quest for the historical Jesus” had begun in the eighteenth century, but it was in the nineteenth century that this higher criticism took off. The German theologian David Friedrich Strauss (1808–1874) posited in his Das Leben Jesu, kritisch bearbeitet (The Life of Jesus, Critically Examined) (1835) that the miracles in the Gospels were actually natural events that those anxious to believe had seen as miracles. Ernest Renan (1823–1892) in his Vie de Jésus (The Life of Jesus) (1863) argued that the life of Jesus, like that of any other man, ought to be open to historical and critical scrutiny. Later scholars such as Rudolf Bultmann (1884–1976) cast strong doubt on the historical value of the Gospels. Some scholars asserted that the canonical Gospels of the New Testament were products of the second Christian century and therefore of scant historical value. Others sug­gested that Jesus of Nazareth had never even existed.

Eventually, higher critics who dated the Gospels to the second century became a minority of scholars. The consensus that emerged dated the Gospels to within forty to sixty years of the death of Jesus Christ. From that gap between the life of their protagonist and their publication, many scholars concluded that the Gospels were over­grown with legendary material. They began trying to sift through the available evidence in order to determine who Jesus was and what he really said and did.

The reaction within the Christian world was mixed. Many Christians dismissed the higher criticism as an attempt to under­mine their faith. Some criticized it for excessive skepticism and one-sidedness, regarding historical-critical investigations of the Gospels and the historicity of Christ as the critics’ effort to justify their own unbelief. But others were more receptive. Large Protestant churches such as the Episcopalians, Presbyterians, and Methodists ultimately abandoned Christian dogma as it had hitherto been understood, espousing a vague, nondogmatic Christianity that concentrated on charitable work rather than doctrinal rigor and spirituality. Other Protestant denominations (including splinters of the three named above) retreated into fundamentalism, which in its original formu­lation was a defiant assertion, in the face of the higher critical chal­lenge, of the historicity of the Virgin Birth of Christ, his Resurrec­tion, and more.

Pope Leo XIII condemned the higher criticism in his 1893 encyclical Providentissimus Deus, but nine years later he established the Pontifical Biblical Commission, which was to use the tools of higher criticism to explore the scriptures within a context respectful to Catholic faith. In 1943 Pope Pius XII encouraged higher critical study in his encyclical Divino Afflante Spiritu. The Catholic Church ultimately determined that because its faith was historical, historical study could not be an enemy of faith, provided that such investiga­tions did not simply provide a cover for radical skepticism.

The higher criticism clearly transformed the Christian world, changing the course of several major Christian communions and radically altering how others presented the faith. Similarly, investiga­tions into the origins of Judaism and the historical material contained within the Hebrew scriptures have affected the Jewish tradition. In Judaism as in Christianity, traditions developed that rejected liter­alism and reevaluated numerous elements of traditional orthodoxy. Reform Judaism, like the liberal Protestant denominations, generally rejected traditional understandings and the literalism that underlay them.

Yet Judaism and Christianity still live, and in many areas they thrive. They have survived the challenge. Can Islam survive the same historical-critical challenge?

No one knows, for it has never received this treatment on nearly the same scale. Why should Islam and its leading figure be exempt from the scru­tiny that has been applied to other religions?

The Power of Legend

Given these three points—the richly detailed portrait of Muham­mad found in the Islamic literature, the way he seemingly inspired his successors to found a vast empire, and his enduring legacy as founder of a religion that today claims more than a billion adherents—few have thought to question Muhammad’s existence. Muslims and non-Muslims alike take it for granted that he did live and that he orig­inated the faith we know as Islam. I understand the influence the traditional account has, for I spent more than two decades studying Islamic theology, law, and history in depth before seriously consider­ing the historical reliability of what the early Islamic sources say the prophet of Islam said and did.

But the more I examined the evidence gathered by scholars who had bothered to apply the historical-critical method to Islam’s origins, the more I recognized how little there was to confirm the canonical story. 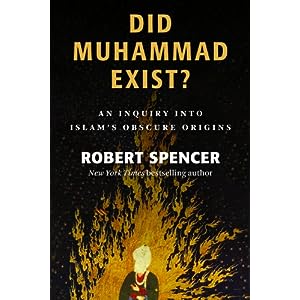 This excerpt is from Robert Spencer’s new book
Did Muhammad Exist? An Inquiry into Islam’s Obscure Origins (ISI Books, 2012)

Robert Spencer is the author of several critically acclaimed books about Islam, including the New York Times bestsellers The Truth about Muhammad and The Politically Incorrect Guide to Islam (and the Crusades). He is a columnist for FrontPage Magazine and the director of Jihad Watch.