For centuries the public square and the street have been the spatial media of public culture. But just how important is traditional public space—urban space—to a genuinely public culture? In an age of increasingly sophisticated electronic communications, does civil society require the physical and spatial arrangements of the traditional city? I don’t know the answers to these questions. But to me the abandonment of traditional urban form seems symptomatic of a decline in public culture. Public space and civic buildings once received a high degree of aesthetic and financial attention, of a sort that indicated their cultural importance. That attention increasingly seems directed elsewhere.

I was struck by one small expression of this recently, in two separate conversations. One was with an acquaintance who had recently spent an evening with friends out in some middle-class suburb of New York, a family consisting of two parents and one child (who the parents had decided would be an only child), and a large house with three bathrooms. This struck my conversation partner as odd. What are they doing out there with all those bathrooms? The other conversation was with an architect friend in Chicago who mentioned to me that she had left her old job in the private sector for her current job in county government because she was “tired of doing $100,000 bathrooms for clients in the north-shore suburbs.”

Both comments touched a nerve, because I had recently (and frustratingly) finished third in a little local competition to design a vacation house—and noticed that the first- and second-place winners had both included three full bathrooms in their designs for a house of less than 1,800 square feet. Silly me; I had only thought to include one and a half baths! Feeling all of a sudden out of touch with America, I began researching the real estate advertisements of my local papers. There I discovered how apparently important bathrooms and bedrooms have become to the definition of the good life in the suburbs.

The growth and proliferation of the automobile suburb is due largely to post–World War II federal transportation and housing programs that clearly appeal to some deeply ingrained American tendencies and desires; but suburbs are actually a nineteenth-century invention. Proximate creations of the passenger railroads, pre-Depression suburbs always had at least a few architect-designed, quasi-palatial dwellings for their wealthiest residents. In the arriviste postwar suburbs of today the democratization of luxury proceeds, but this time promoted less by architects than by professional builders in the speculative housing market. One manifestation of this appears to be the increasing prominence of master bedroom “suites” and the increasing number and size of bathrooms found in houses targeted at the middle and upper-middle classes.

Evidence for this trend is certainly ample in the “home guide” section of any American newspaper. In a 1997 edition of the Chicago Tribune I found a typical feature article about a thirteen “custom home” development at the outer edges of suburban Chicago where the different three- and four-bedroom residences ranged from 2,800 to 3,800 square feet—comparatively small by current standards. All thirteen houses featured master suites segregated from secondary bedrooms. One advertised a suite with a walk-in closet that “looks like it could accommodate the Mormon Tabernacle Choir,” and two-person showers sans doors (“bigger than some cars”). Each house had multiple bathrooms; several had four, and one had six.

We can hope (though should not presume) that most of these houses are well built. It seems noteworthy however that none of them are either architect-designed or (from the photographic evidence) aesthetically distinguished. Moreover, if the prominence of their bedroom suites and bathrooms is not necessarily typical of most new housing construction, neither is it particularly unusual or confined to automobile suburbs. In the same paper there were numerous advertisements for new “luxury townhomes” in older Chicago railroad suburbs, many featuring two bedrooms and two and a half baths. Increasingly, the market assumption appears to be that every bedroom in new residential construction requires its own bath. This was common in luxury residential construction for most of the twentieth century, but appears now to have trickled down to suburban middle-class housing as well.

What, if anything, should one make of this? At one level, I think the appropriate answer is “not much.” Within the requirements of justice, people with money are and should be free to spend it pretty much however they want, and I have zero interest in or passion for denigrating the virtues of private home-ownership, personal hygiene, and modern plumbing. At another level, however, a residential ideal of one bathroom per bedroom can have the insidious effect of becoming the standard by which housing comes to be deemed acceptable. And as this ratio becomes normative, embodied in building codes and other institutional regulations, it makes it that much more difficult to create affordable housing for that sizable sector of society unable to buy in affluent suburbs.

But there are cultural issues here as well. Architecture high and low expresses and embodies, intentionally or not, cultural ideals and aspirations; and in light of the residential building industry trends featured in the Tribune, it may be worth reflecting upon what some of these are. Journalist Karen Tensa, reviewing Bathrooms: Inspiring Ideas and Practical Solutions for Creating a Beautiful Bathroom (Clarkson Potter, 1996), expresses the view that today’s opulent bathrooms and bedrooms represent a rejection by Americans of our “puritanical roots.” This is plausible enough, as far as it goes; but the implications of this rejection may be larger than she realizes, and not entirely benign.

Bigger and more luxurious bedrooms and bathrooms seem to me just one physical manifestation of that shrinkage of the public realm happening reciprocally and in tandem with America’s true growth industry, the care and tending of the autonomous self. Like the decline of the street and square as active public spaces—and the demise of the alley, the ubiquity of the driveway, the transformation of the garage door into the front door, the demise of uninterrupted curbs on residential blocks, the relocation of domestic life to yards and family rooms at the rear of the house, and the creation of complex suburban roofs apparently intended to simulate small villages—the growing number and importance of domestic bathrooms and bedroom suites indicates yet another way we materialize in our built environment our culture’s turn from the civic to the private.

This turn to the private would have dismayed but not surprised Alexis de Tocqueville. Indeed, Tocqueville recognized individualism as a peculiarly democratic proclivity. His 1840 characterization of individualism (“a mature and calm feeling, which disposes each member of the community to . . . draw apart with his family and friends, so that after he has thus formed a little circle of his own, he willingly leaves society at large to itself”) goes far toward describing a social reality that has taken physical form in the American suburb.

But I have one more contemporary bathroom story; and though it is not a story of suburban bathrooms, it too is a tale about architecture, public culture and democratic ideals. The central campus of the University of Virginia is considered by many the most beautiful spatial and architectural ensemble in the United States. Designed by Thomas Jefferson as a model “academical village,” the university’s purpose was to help create and promote an educated citizenry, which Jefferson thought necessary for the success of an emerging American democracy. For an Enlightenment luminary such as Jefferson, reason rather than church or crown was to be the authoritative principle of America, and this dictated among other things that a library rather than a church or chapel would occupy the premier position at his university. The library (the Rotunda) therefore sits atop the highest point on the original campus. A secularized version of the Pantheon in Rome, the Rotunda terminates the north axis of a large green space—The Lawn—that itself is flanked on its east and west sides by a series of ten residential pavilions interspersed between some fifty-six cell-like rooms connected in front by Doric colonnades. The pavilions were designed originally for double duty as both faculty residences and classrooms, and the cell-like rooms were built to house the student population.

Today Virginia’s student body numbers approximately seventeen thousand and the full-time faculty some twenty-four hundred; the university’s physical facilities have grown accordingly. The Rotunda is no longer the university library but remains, with The Lawn and the rest of Jefferson’s original design, the symbolic center of campus life. Likewise, the pavilions are no longer used as classrooms, but are instead residences occupied by various deans and administrators as well as select faculty members. The student rooms, however, continue to be occupied by an elite group of senior undergraduates, chosen on the basis of outstanding academic and extracurricular performance at the university. This is regarded as a singular honor, and student residence “on The Lawn” is highly coveted in spite of several inconveniences—including the fact that student rooms are equipped with neither toilets nor showers (which are located in outbuildings behind the student quarters).

At Virginia, therefore, elite students voluntarily forfeit—even if only for an academic year—personal comforts available in every other university residence facility for the honor of living on The Lawn and the pleasure of its building and spatial arrangements—a little vestige of ascetic culture right here in the good old U.S.A. I might as well also point out that the design of this premier architectural icon, this intended microcosm of a fledgling democratic culture, is strikingly hierarchical. Jefferson physically and spatially subordinates the student rooms to the faculty pavilions, and both to the majesty of the Rotunda and The Lawn (the latter being the equivalent of the university’s public square); and this hierarchical arrangement of buildings and spaces together embody and express the shared purposes of the academic community.

Both Jefferson and Tocqueville believed that democratic liberty depends upon culturally encouraged habits of individual self-restraint and concern for the common good. But Tocqueville recognized that the conflicting democratic ideals of freedom and equality tend themselves to undermine the self-restraint necessary for democracy to work by creating a restless and dynamic social milieu that fosters envy, individualism, and that unlimited desire for material pleasures that has become contemporary consumerism—a large cultural habit that finds one small expression in the proliferation of the “post-puritan” domestic bathroom and one large expression in the decline of civic architecture, the street, and the public square. And although both Jefferson and Tocqueville were articulate advocates of democracy as the form of government best suited for a just society of free human beings, Tocqueville the French Catholic aristocrat had a decidedly stronger sense of original sin and the corruption of human nature than did Jefferson the Deist Virginia gentleman—and hence also a stronger sense of the fragility of democratic government, the corrosive agents to which it is vulnerable, and the kinds of character virtues necessary to sustain it.

Our dominant moral imperative today is expressive rather than renunciatory, and we pay an aesthetic, spiritual, and cultural price for this. That the rising status of the suburban bedroom and bathroom coincides with the decline of the public realm and the nadir of civic architecture is not, I think, by chance. The irony of Mr. Jefferson’s University is that the young democratic culture it celebrated in such enduringly transcendent beauty may have become, in its loss of individual self-restraint, a democratic culture almost wholly incapable of producing transcendent civic architecture. 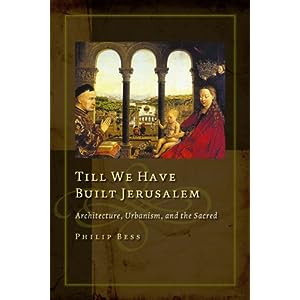 This excerpt is from
Till We Have Built Jerusalem: Architecture, Urbanism, and the Sacred
by Philip Bess (ISI Books, 2006)

Philip Bess is a Professor and the Director of Graduate Studies at the University of Notre Dame School of Architecture, and the principal of Thursday Associates in Chicago, a research and consulting office committed to rethinking American architecture and urbanism. The author of three books, his essays have appeared in Civitas, First Things, the Christian Century, the Classicist, and the Humanist Art Review, among many other periodicals.